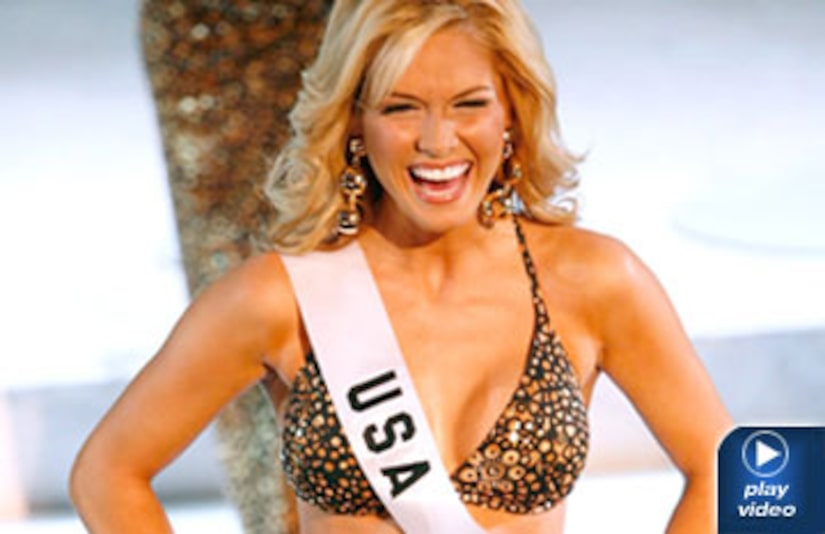 Beauty queen Tara Conner traded bikinis for a business suit Tuesday, as she broke down in tears at a press conference in New York.

“I've had a very big blessing bestowed upon me,” Conner said, promising to fulfill her role as a role model to others.

Trump refused to tell Tara, “You're Fired,” explaining, “Tara is going to be given a second chance.”

Tara's tiara days had been rumored to be numbered, after accusations surfaced of underage drinking and a report she failed a cocaine test.

“We all have our demons,” Tara said. “Drug issue? No comment on that.”

Now, Tara is headed to rehab to battle her demons, public and otherwise.

“He showed a lot of compassion today, and I really admire him for that,” Candace commended.

“I crowned her,” added Miss USA 2005 Chelsea Cooley. “I think she's a good person, and I think she fully understands how blessed she is to have a second chance.”

“Extra” has also learned that Tara was scheduled to celebrate her 21st birthday at Pure nightclub in Las Vegas Tuesday night. However, the party was called off just hours before Trump's dramatic announcement.

Instead, the woman, who at age four was third runner up in a local apple festival pageant, will have a chance to make good on her pledge.