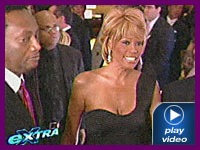 Tabloid headlines and divorce drama couldn’t keep a radiant Whitney Houston from showing off her pearly whites Saturday night, as the greatest voice ever stepped back into the spotlight on the arm of music mogul, close friend and mentor Clive Davis.

Dazzling on-lookers in Armani, Whitney revealed that she’s not only stepping out, she’s stepping up to the microphone.

“We’re looking for material right now,” Davis told us. “We’ve got four songs; we need, obviously, about seven or eight more. And then we’re going to do her thing.”

But before the musical legends team up for the yet-to-be released CD, they united for the Mercedes-Benz 17th Annual Carousel of Hope Gala in Beverly Hills, an all-star benefit to fight juvenile diabetes.

Stone, who is a constant on the charity circuit, revealed to us how she remains so passionate about giving back.

“Otherwise celebrity is just dumb,” she simply stated. “So if you can use it to do something good in the world, isn’t that nice.”

“I can’t think of anything more important than being here,” Hatcher echoed.

Diabetes is something that plagues even superstar Halle Berry, who told “Extra,” “You’re never really cured of diabetes. You’re either on insulin or oral medication or you control it with your diet.”

Backstage, Halle saved a huge hug for Whitney, while Rita Wilson and Houston shared a moment during dinner.

Clive Davis, who was honored with The Brass Award, made a point to brace the crowd for a Whitney comeback.

“We all know that the best singer in the world today is Whitney Houston,” he said.

Quincy Jones, who received the High Hopes Award, was also optimistic about Whitney’s future, revealing that he firmly believes she’s only going up from here.

Usher, who razzled and dazzled the crowd, also asked the public to embrace Whitney.

“I advise each and every one of you to start saying prayers now to make sure that it’s positive when it happens,” the super sexy performer pleaded.

Even “American Idol’s” Jennifer Hudson and Katharine McPhee dedicated their performances to their pop idol.

“I want to sing it for you,” Kat revealed. “You truly are an inspiration.”

Only “Extra” was with Katharine just moments before the big show as she glammed up for the big night, decked out in Levive jewelry and making the scene with her real-life gem, boyfriend Nick Cokas.

So how does Kat pick her men?

“I try a lot of different things, but this one kind of worked just by being myself,” she said.

Teri Hatcher looked va-va-voom sexy in Gianfranco Ferre, but Teri’s claws came out backstage when she was determined to win some items off of her holiday shopping list inside the event’s exclusive silent auction.

“Don’t tell my daughter,” Teri said. “She collects Barbie’s, so I bid on these and I’m going to give them to her for Christmas.”

From charity to love, it was truly a night to remember!