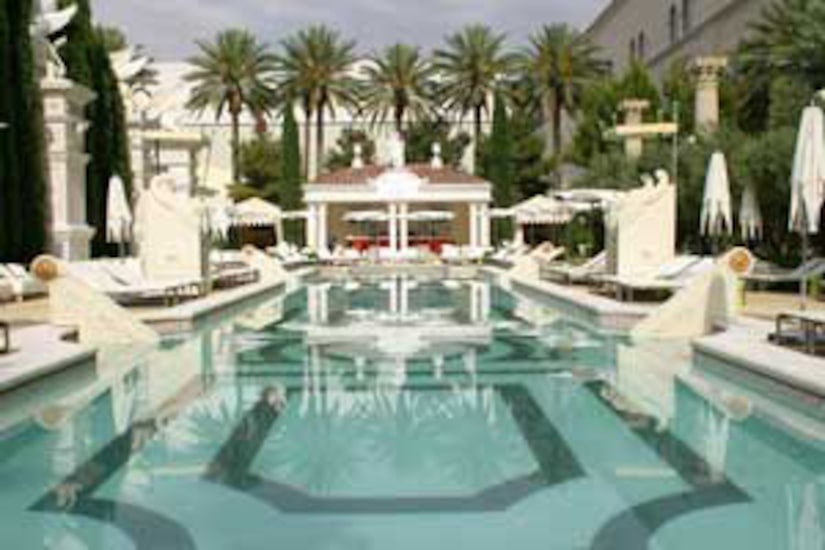 So is it getting colder where you live? Yeah, the same thing's going on here in Vegas. Instead of 114 degrees during the day, it's now in the low 90's. So even though the leaves are changing all over the country, we've still got perfect pool weather in Sin City.

That being said, allow me to introduce you to the latest fad in pool action on the Strip: the European Style Pool. Do you, uh, follow me? Do you get what I'm sayin' here? I'll spell it out for you if I have to… They're tops-optional pools.

Mandalay Bay's got one. So does The Wynn. Heck, even The Stratosphere is going topless on its 25th floor. But what is the best European Style Pool in Vegas? That would be The Venus Pool at Caesar's Palace.

First off, Venus is run by the people who brought us the reigning best hotspot in Las Vegas, Pure Nightclub at Caesar's Palace. The owners of Pure are always going all out to make sure the party is off the hook, and they bring that same commitment to opulence to Venus.

There's DJ-spun tunes that are hip enough to remind you that you are hangin' in the biggest party city in the world, yet laid-back enough to not give you a headache. Speaking of headaches, the best part of Venus and every other European Style Pool in Las Vegas: NO KIDS ALLOWED!!! If you aren't old enough to drink, you aren't old enough to enjoy these exclusive pools. That means no screaming tykes and no stressed out parents. Is this heaven? No, it's Venus.

There is a cover charge to get into Venus, but between you and me, the cover charge isn't something you need to worry about, because if you don't have game, you ain't getting in. (Note: I haven't had game for about 2 years, but the "Extra" business card and the promise of this blog got me past the velvet rope.)

While the gentlemen bouncers dressed from head to toe in white called upstairs to get clearance for me and my friends to get into Venus (see above note), two extremely hairy guys in their middle 40's walked up, money extended, ready to pay whatever cover needed to get themselves in. They were politely told by the Venus bouncers, "Sorry, guys, beach attire only." The two 40-somethings looked like someone had just told them that there is no such thing as Santa Claus. I thought for sure they were going to ask for a booth challenge on the definition of "beach attire." But upon further review, one of them was wearing sandals WITH socks… black socks. The call on the field stands.

Once inside, we were taken to our unbelievable cabana. There were huge, overstuffed chaise lounges just outside the tented cabana and a flat-screen TV, fridge and comfy couch inside. I plopped down, grabbed the remote, searched for Extra (brown-noser) and when I realized it wasn't on, I found a PGA golf tournament. I was relaxing on a plush lounger, getting a tan, surrounded by barely-dressed, beautiful women, enjoying a cocktail and watching Tiger Woods. Is this heaven? No, it's… well, actually, yes, it is heaven.

Just when I thought it couldn't get any better, our waitress, who looked alarmingly like the lead singer of The Pussycat Dolls, brought over a bowl of frozen grapes. Now, would you think I was the biggest hick in the world if I told you that I had never tried a frozen grape in my life? Well, let me tell ya… frozen grapes are like candy! And I think they're good for you. I hope they are… because I had, like, a billion of them.

So let's get to the part that everybody who has read this far wants to know about. Yes, at the Venus Pool, there are women walking around with no tops on. The first time I went to Venus for a quick walk-through (hey, I'm a thorough journalist), I noticed that only about 20 percent of the women were going topless. (That's my best guess because counting the women and then whipping out a calculator would have been not cool.) But on this Tiger-Woods-frozen-grape day, almost every lady there was feeling European. (This is where your peripheral vision skills reeeeaaaalllyy come in handy.) I joke, but staring will get you a warning from the attentive staff, and persistent gawking will get you the gate.

After about the first 30 minutes, you get used to the whole she's-not-wearing-a-top thing. Of course, I never wear a top to the pool, so there's a chance I have no idea what I'm talking about. But from what I saw, the key to success at The Venus Pool is to be cool. And just like the other 21 hours of the day, it's tough to be cool if you're staring at a women's chest. So everyone in Venus bands together to survive in this new, strange environment. It's like you're in "Lost," and "the others" are wearing black socks with sandals.