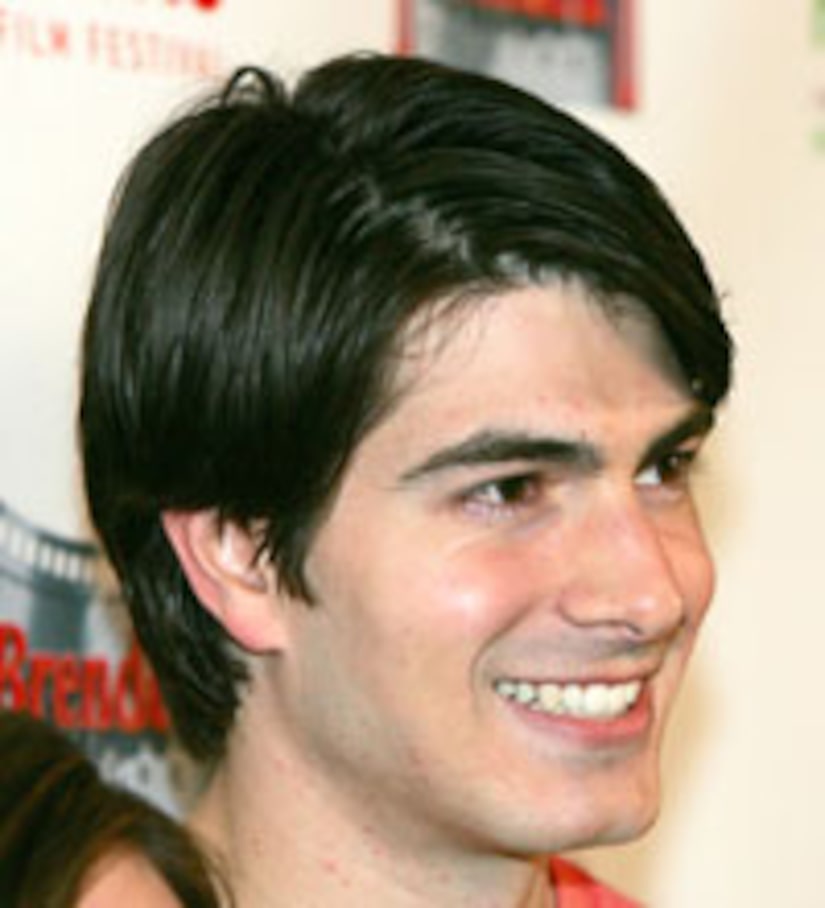 The bowling balls in the Kingpin Suite at the Palms Resort and Casino come in a wide assortment of colors. So when the star of "Superman Returns" Brandon Routh picked up the brightest, non-manly green ball on the rack, I shot him a look of "Why?"

Bringing the almost-glowing green bowling ball close to his face, Brandon coolly looked at me and whispered, "This proves that Kryptonite has no affect on me."

I was spending the day with Brandon and his lovely girlfriend Courtney Ford. (I'm trying to be classy by using the word "lovely" for Courtney because if I more aptly described her as "other-worldly-attractive," that would be getting dangerously close to a stalker-like compliment.) It was fitting that the three of us were hanging in the Palms Suite featuring a full-function bowling alley because Brandon and Courtney first met at Lucky Strike Bowling Lanes in L.A., where the future Superman was working as a bartender. Brandon and Courtney are now starring together in the independent film "Denial," which was debuting at the CineVegas Film Festival, Sin City's answer to Sundance.

Let me take this opportunity to put in writing a fact that every reporter who has interviewed Brandon is already saying: he is the nicest guy you'd ever want to meet. Now I know what you're saying… "Why shouldn't he be nice?! I mean, he just won the acting lottery by being cast as the most recognizable hero in American pop culture!!" Take it from me, being a talented young actor and being a cordial person, doesn't always go hand-in-hand.

Later, as we were circling the pool table sizing up our 8-ball shots in the Palms' Kingpin Suite, I kept reminding Brandon about how his life is going to change when "Superman Returns" hits theaters. (I was less about trying to get an in-depth "Extra" interview and more about trying to distract him from kicking my butt in billiards. It didn't work.)

Brandon would always politely stop playing pool to answer my questions, assuring me he won't let his life get out of control. He added that having a loving, supportive girlfriend like Courtney, who he's been dating for 2 1/2 years, will keep him (pardon the Superman pun) grounded.

So since he brought Courtney into the conversation, I asked, "Have you guys thought how you're going to answer marriage and baby questions when the world tries to delve into your personal lives on the red carpet at Superman's world premiere?"

Brandon and Courtney looked at each other, shrugged and laughed. I couldn't tell if it was a nonchalant laugh or a nervous laugh (or maybe a bit of both), but their answer came with a simple shrug: "We haven't really thought about that. Should we?"

At this point, I wanted to shake Brandon and exclaim, "Do you realize in a few weeks, you're going to be Brad Pitt?!?!?!?!"

But then I realized something as Courtney sank the 8-ball…

Brandon DOES realize that he could be the next Brad Pitt. And this is the person he wants the world see. Shy, gracious, pleasant, warm, friendly.

My theory was solidified when our "Extra" cameras stopped rolling. As Brandon was shaking my hand and telling me how much fun he had doing the billiards and bowling thing with us, I told him, "Don't lose this."

"Lose what?" he asked with a smile.

"Don't lose yourself in the stardom that is about to take over your life."

Brandon then TOLD me that he gets it. He gets that his stardom IS bigger than he is. He told me that there are so many other factors influencing his success: producers, directors, managers, agents and TV shows like "Extra." By leaving a lasting positive impression on all the people involved in his career, his career will in turn be more positive. Trust me, that's a far cry from the "I'm-the-center-of-the-universe" view that some stars adhere to.

My wife and I went to the Palms' N9ne Steakhouse for dinner later that night, and she had to endure hearing me go on and on about how refreshing it was to hang with Brandon that day.

"It sounds like you really dug this guy," my wife said to me with more than a hint of sarcasm.

"Great, now you're going to accuse me of having a man-crush," I sighed.

"No… nooooooo," my wife responded, trying to hold back a laugh. "You've got a Man of Steel crush."