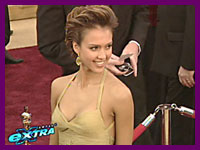 Balenciaga, Versace, Vera Wang and Dior were just a few of the couture names flying around on the red carpet Sunday night.

Oscar presenter Nicole Kidman looked stunning in a sleek, white Balenciaga gown. She admitted to "Extra" she "squeezed into" the gown. Nicole topped her look with minimal jewelry, which was a key to this year's red carpet look.

And Oscar nominee and "North Country" star Charlize Theron made heads turn; the beautiful South African wore a slate Dior Couture gown, complete with a brimming bow on the shoulder.

Uma Thurman struck a pose in an ethereal Versace. And Hilary Swank looked swankier and sexier than ever in a strapless black gown. But she decided to lose the necklace, opting instead to wear her wedding ring!

Jennifer Garner arrived sans hubby Ben Affleck, but looked radiant in a svelte and figure fitting Michael Kors. And hot couple JLO and Marc Anthony both dazzled on the red-carpet: she shimmied in a pimento green goddess gown by Jean Desses. "Green's a lucky color for me," she revealed.

Keira Knightley was the buzz of the red carpet in her asymmetrical Vera Wang confection. But her beautiful dress wasn't easy to find: "I tried on about ten (dresses)," she revealed.

Trend-setter heavyweight Will Smith and wife Jada were all smiles as they strutted down the red carpet. Will admitted, "This is the first time in our family when we've gone to one of these events where she actually matched my outfit."

And Dolly Parton, who is still smoking at 60, told "Extra": "I'm wearing millions of dollars worth of diamonds."

People Magazine's Galina Espinoza joined "Extra" to give the fashion play by play, where the fashion statement was simplicity! "That's the trend," Espinoza revealed. "It's was either earrings, no necklace or necklace, no earrings."

And the smoking red carpet looks kept coming! It was basic black for presenter Jennifer Aniston, who wore Rocha with a 1920's double strand dazzler from Bulgari.

Hot "Housewife" Felicity Huffman took the plunge in a daring Zac Posen and two million dollars worth of diamonds! "Isn't it fantastic?" Felicity chided. "I should be cooler than that."

Espinoza loved Felicity's look and said, "She went for the plunging neckline, which is a lot sexier for Felicity. It's almost as if she's saying, 'This is my Oscar moment. I know it and I'm going to make a statement.'"

And it was skin city for red carpet ingénue Jessica Alba, who was a sensation in a gold, ornate Versace! And after she stopped by to hang out with "Extra," Mark revealed, "I've got to say, I have a new favorite for best dressed."

Curvaceous presenter Salma Hayek rocked the red carpet in an eye-popping metallic blue Versace, topped with earring and a diamond ring valued at over 4.3 million dollars!

And not a lot of Oscar winners would have the guts Judi Dench did to reveal how she spent the afternoon! "Picking out a thong, of course," Dench admitted. She went one step further revealing it was black.

And as Mr. Rico Suave George Clooney graced the red carpet, he made everyone wonder if he was wearing the same tux he claimed to be wearing for 10 years straight. But the dapper George brushed that off, as he went for red carpet cool in Armani.

After examining the red hot evidence, Espinoza revealed her favorite was Oscar winner Reese Witherspoon. "She looks like Grace Kelly," she said. "With her hair pulled back and the dropped earrings; it's perfection!"

And Espinoza also revealed that Charlize Theron's daring bow was the boldest statement of the night! "Not a lot of women would have the guts to wear that dress, and I applaud her for it," she admitted.

So who does "Extra" applaud as best dressed? The trophy goes to sexy screen siren, Jessica Alba, who was the golden girl of the 2006 Oscars!