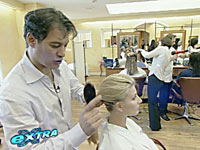 Hollywood's biggest night requires quite a bit of preparations, and "Extra" is getting primped, polished and buffed with Hollywood's best as they get set for Oscar Sunday.

The first thing you need, besides a shower, is a killer coif from celebrity stylist Marc Anthony. "The hottest red carpet looks are going to be swept off the face," Anthony revealed. "Or a little slung bun or sexy pony tail. But definitely dressed up with some hot jewels."

Over at the Frederick Fekkai's Salon, it's all about sexy. "It's about really being sophisticated, sexy and elegant," Fekkai said. "And to have a look together."

For those who prefer to go this rout, Botox is also available.

Up next it's time to pick an outfit. But forget gowns -- each of the Best Actress nominees will receive diamond-encrusted lingerie from Chantal Thomas of Victoria's Secret.

"I designed the bow," Thomas revealed. "It's a five-and-a-half carat diamond."

Once you dazzle beneath the gown, it's time to add pizzazz to your feet. Shoes are taken care of thanks to legendary designer Stuart Weitzman, who built a pair of million dollar heels for nominee Katherine York.

Diamonds come next, and "Extra" got an exclusive tour of the Diamond Aquifer Lounge from Olympic silver medalist Sasha Cohen. But when it's diamonds you're after, Harry Winston is the only place to go.

Susy Korb, the creative director at Harry Winston, showed us a 73 carat diamond that costs $6 million, and come Sunday, it may just land on the finger of nominee Reese Witherspoon.

But if diamonds aren't your thing, pearls, like the ones from pearlparadise.com that were designed for Charlize Theron, are always a classic and fret-free choice.

After the last Oscar is handed out on Sunday, the stars will head to the Annual Governor's Ball where Wolfgang Puck will prepare a meal to die for.

Then it's over to Elton John's AIDS Foundation Spectacular. And you can bet, "Extra" will take you there every step of the way!