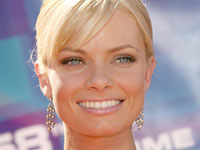 Here's what we're recovering from last weekend. "My Name is Earl" star Jaime Pressly partied it up with "Extra" not one… not two... but three nights last week. First, the extremely sexy star showed off her new fashion line at Pure Nightclub at Caesar's Palace. Next, Jamie gave "Extra" a tour of her sweet suite: the Erotic Suite at the Palms Resort and Casino. Her neighbors at the Palms last weekend included members of the Super Bowl Champion Pittsburgh Steelers. Jaime joined the Steel Curtain for a little bowling in the Palms' Kingpin Suite. (Yes, the Palms' Kingpin Suite has two bowling lanes.) Then it was off to Charlie Palmer's Steakhouse at the Four Seasons where Ms. Pressly enjoyed some 5-star cuisine. To cap the evening off, Jaime took "Extra" back up The Strip to the fabulous Wynn Hotel to party at Tryst Nightclub.

A little backstory for you... Every Vegas nightclub has a unique characteristic that separates it from the rest of the pack. Pure at Caesar's has the huge outdoor party deck (my personal favorite), Tao at the Venetian has the big Buda, Mix at Mandalay Bay has an amazing view of The Strip from 60-stories up. Well, Tryst has one of the coolest characteristics of all: there's a 94-foot waterfall right in the middle of the club!! I mean, how can you not have a great time with a 94-foot waterfall cooling you out all night?

Saturday night, things got physical at Mandalay Bay, as a packed house cheered "Sugar" Shane Mosley on to victory over Fernando Vargas in the 10th round TKO during the Junior Middleweight Main Event.

Sunday night, "Extra" journeyed to Light Nightclub at the Bellagio to interview supermodel Caprice from "The Surreal Life." She was launching her own lingerie line, and all the cocktail servers at Light were wearing her mega-hot bedroom attire. As if Light needed any more beautiful people walking around!

This weekend, the biggest rock n' roll band in the world, The Rolling Stones, perform at the MGM Grand's Garden Arena on Saturday night. Also on Saturday, over at Mandalay Bay, Styx goes "Mr. Roboto" on all in attendance. And one of the great post-punk bands of the '80s, The Cult, rocks The Joint at the Hard Rock Hotel and Casino on Friday night.

If you're more into sports, the best tennis players in the world are battling it out this weekend in Sin City at the Tennis Channel Open. What? Not rough enough for you? Okay, how about The Ultimate Fighting Championship at Mandalay Bay on Saturday night? That's what I thought.

And in the next few weeks, Extra will "Runaway" to Vegas with Bon Jovi. We've also got the most popular sport in America right now, NASCAR Racing, speeding things up in the desert next weekend. And don't forget, the biggest movie stars on the planet will be here in March for ShoWest. Everything is happening in Las Vegas, and "Extra" is all over Las Vegas!! See you next week!!